Chakangrao ancient site was the Kamphaeng Phet downtown, had the same concept of town plan as the old Sukhothai and Si Satchanalai, with separate zones for religious sites both within and outside of town limits. Structures are usually large and made of laterite. Religious sites on the west bank of the Ping River at Nakhon Chum are built of bricks and smaller size. Remains of the ancient sites within the city walls are as follows:


2 kilometers to the northwest of Kamphaeng Phet downtown along Ratchadamnoen 2 road. I park nearby Wat Phra That and walk to Wat Phra Kaew that selected as the first site of this historical park. In front of the temple I see the salient chedi at the center. Behind the main chedi is the wihan with Buddha statues shrine on the base walk to the back you will see the round chedi with elephant-adorned base.
Phra Kaew Temple (Wat Phra Kaew) is a large royal temple in town centre near a site believed that it was a palace used on important events of the city had no monks in residence. Major features include the main chedi with lion-adorned base and a round chedi with elephant-adorned base. There are also other chedis of different bases and remains of several chapels. Its boundary is marked off by laterite walls.


Walk back to the front this is Wat Phra That you will see that these two temples share the wall together this is the second of the biggest temple.
Phra That Temple (Wat Phra That) situated to the east of Wat Phra Kaew. Here the main chedi is built of mixture of laterite and bricks with 15 metres wide octagonal base, Kamphaeng Phet style architecture. Wihan base made of laterite in front of the main chedi and a subordinate stupa at each front conner of the lateritic wihan.

Sa Mon is the site of ancient palace located to the north of Wat Phra Kaew with a square earthen ramparts adjacent to northern town wall. Surrounded the walls on three sides are moats with a quadrangular pond in the middle. By means of tiles for covering roofs, earthenware, tools and utensils were found in a large number. There are no standing structures remaining today.


After finish on the ancient palace site we drive to another zone if you have bicycle that will be good. The zone outside the palace called Aranyik zone situated to the north you can use the same ticket. This zone has many small ancient sites or almost a hundred temples here but their remains are small however some of them are interesting and all of these temples situated on the main road you will see many of ruins between them most of the tourists will not stop. Recommended are as follows.

Wat Phra Non situated outside the town towards the north in the area called Aranyik (forest temple precinct). buildings in this temple were mostly made of laterite. In front of the temple there are a well, wash room and a shelter. In temple a base of the ordination hall with octagonal columns is at the front. Adjacent to the already mentioned base is a wihan building formerly enshrining a reclining Buddha statue regarded as the main Buddha image of this temple. Each pillar, providing a place for timber joints, points to timber - structured roof of the wihan. The lateritic wall of the wihan was built in form of balustrades. Behind the wihan base stands the main bell shaped - chedi of this temple. Apart from the buildings mentioned above, there are many more of the ancient ruins within this temple.


Wat Phra Si Iriyabot situated 100 meters to the north of Wat Phra Non, this temple has a well, a wash room and a shelter like those of Wat Phra Non. Its significant buildings include a wihan at the front of the temple on a large base which was designed for a walk in clockwise direction as part of religious rites and a mondop located behind the wihan. The mondop functioning as the main chedi of this temple was constructed in square form with porches on four sides. Four niches in each side of the mondop wall were built to enshrine Buddha images in four different postures, walking, sitting, standing and reclining. At present only the standing Buddha image in the south still remains. Judging from its forehead and chin, these Buddha images belong to Sukhothai style of art with characteristics of the Kamphaeng Phet school.


Phra Sing Temple (Wat Phra Sing) is believed to have been constructed during both the Sukhothai and Ayutthaya periods. With laterite walls, it has a square-shaped base main chedi with arches on four sides. In front of the ubosot are ornamental lion and Naga figurines.


Chang Rop Temple (Wat Chang Rop) situated at the top of the mound in the Aranyik area, the remains of this ancient temple comprise the main chedi, a base of a large wihan and a pond dug into a bed of laterite. The main chedi was built in the form of a bell. The uppermost part of its lower base of vast size was built in the form of a quadrangle with steps on four sides leading to its upper base which was designed for a ritual walk in a clockwise direction. The lower base was highly elevated, decorated with 68 sculptures of ornamented elephants emerging half bodies from its four sides with flora designs in high relief carved in between.

Apart from these temples, there are also several ancient sites on the east bank of the Ping River, including Wat Arwat Yai, Wat Kalothai and Phra Ruang Road.

Muang Nakhon Chum is an ancient town on the west bank of the Ping River. Its 2-3 metre-high earthen walls run along the waterway. It is in the area that the famous religious tablets of Kamphaeng Phet have been discovered. Within the town walls are a couple of ancient sites such as the Kamphaeng Pom Thung Sethi located on Phahonyothin Road just before entering the town. It is part of the laterite fortifications 83 metres long and 6 metres tall.


Phra Boromma That Temple (Wat Phra Boromma That) is a temple situated in the centre of Muang Nakhon Chum featuring a Burmese-style Chedi. To the south is an Ubosot housing several Sukhothai- and Ayutthaya-style bronze Buddha statues. The Chedi itself is believed to originally have been a Sukhothai-type structure, its style having been altered during a restoration work financed by a wealthy Burmese about a century ago.


Another ancient town is Muang Trai Trueng. It was built by King Chaisiri of Chiang Rai who fled invading enemy in 1542 B.E. (circa 999). Today most of the structures are in disrepair with only ruins of chedis and ramparts. The town is about 18 kilometres from Kamphaeng Phet on the Kamphaeng Phet-Khlong Lan road. 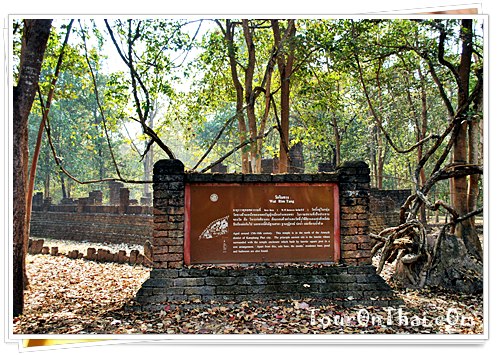 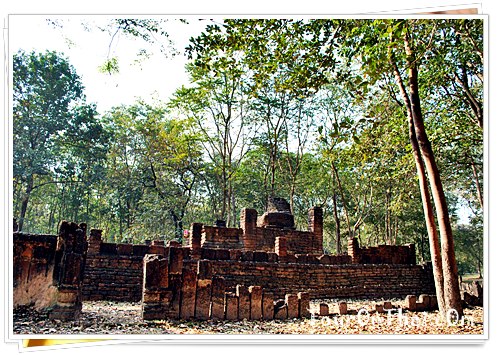 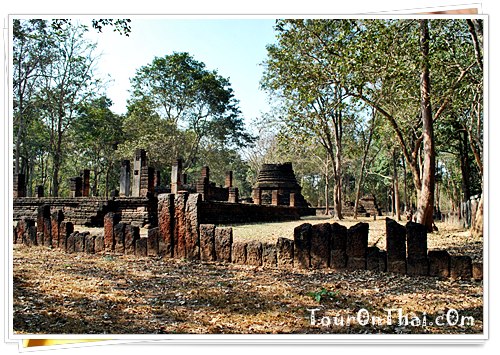 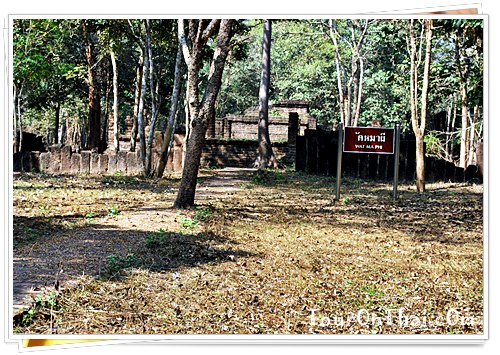 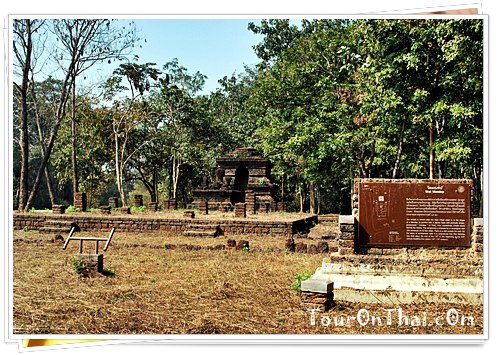 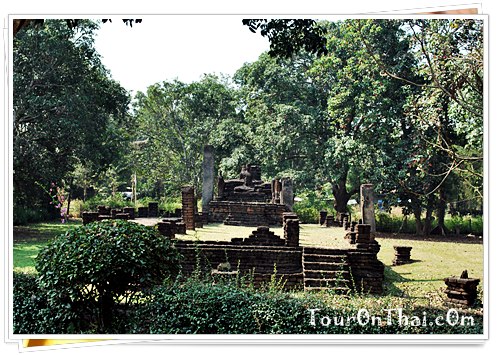 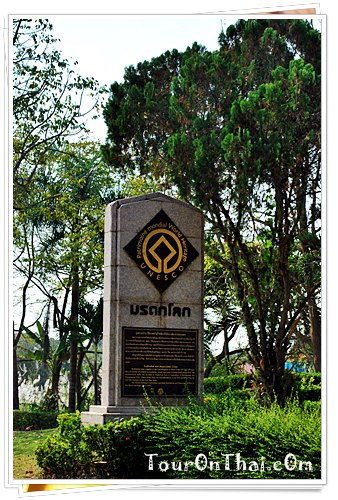 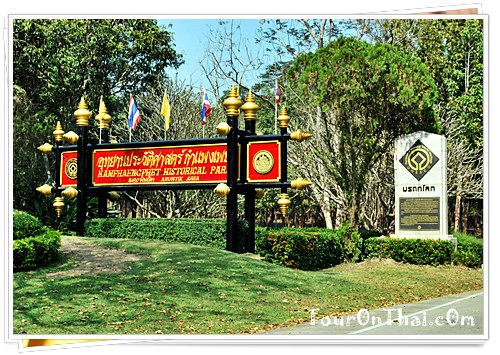 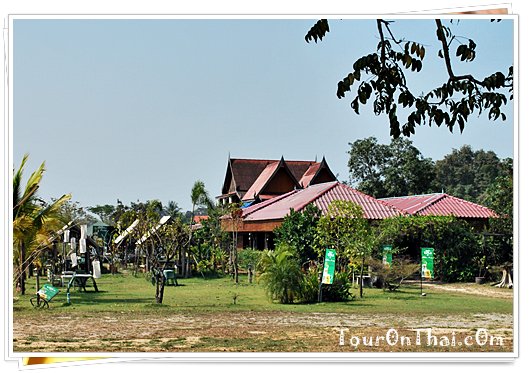 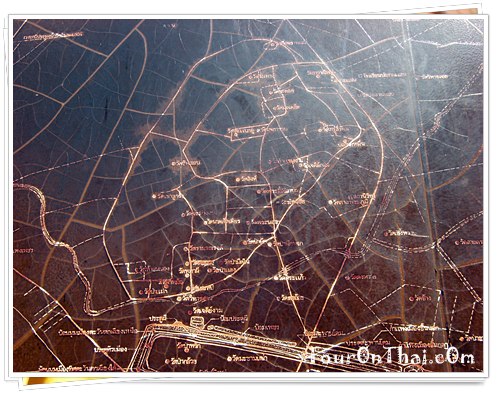